Today, at the wise  age of 84, my grandfather passed away after a heart attack in his sleep. I usually try to keep my private and professional life separate but I wanted to take a moment to honor his memory in writing publicly. This reads as a (semi-)organized stream of consciousness and hopefully serves as a coping mechanism as well.

My grandfather, Prabhu D Ahuja, married my grandmother, Puran (Masand) Ahuja, when she was 27, and he was 32. It was an arranged marriage, but the two loved each other instantly and constantly for the last 50+ years. My grandmother said that when she met him, she asked him one question, “are you honest or do you steal people’s money?” You see my grandfather was a bus conductor. In India, the profession was infamous for cheating you out of your money and overcharging. On being asked this very blunt question, my grandfather responded “no!” to my grandmother, and they were promptly married (short version). They raised two beautiful, smart, and truly amazing kids – my mom and my uncle. They also ran a family business from scratch – turning their own home into a factory to create sleepwear. They were the number one company for selling nightwear for 10 years in India before they decided they wanted to retire. Together, they created a family, a business, and a legacy. My grandfather also sent my grand-uncle (my grandmother’s brother) to the United States in the 70s, he pushed my uncle to come to America in 80s, and took his kids traveling around the world in their teenage years. Despite not being very educated, he valued education and travel and always pushed those around him to achieve their best.

In the last couple of years, my grandfather developed Alzheimer’s disesase and didn’t recognize much around him unless it was continuous. He recognized my grandmother (who he saw everyday) but didn’t know his own son and daughter when they visited. In a way it was a blessing – he had a chance to forgive everyone before he left the earth, whether they knew it or not, or whether they cared or not. He was quiet most of the time, but opened up once he saw that you were going to stick around (he would open up after the first week of visiting). Upon lending my ear, he would talk about all his travels to Calcutta and all around India for business, about his son who was a hot-shot in America, and about his daughter who he dearly loved.

Due to circumstance, I was the one that had to deliver the news to my mom about his passing. I woke her up in the middle of the night and handed her a phone that would change her life forever. I didn’t feel I had the right to say the words, so I let my uncle explain what had happened. Sometimes I wonder how these small moments are actually culminations of a lifetime. The fear that I saw in her eyes when I woke her and the acceptance with which she accepted the news only confirms that she’s the strongest person in my life.

Today has been the first day of mourning (of 12). I’ve spent most of the day thinking about him, the fond memories I have when I was younger, and how he’s in a better place. The last couple of years have been rough as his health continued to deteriorate, taking a toll on my grandmother as the caretaker as well. I spent a couple hours looking through old pictures trying to find some of us together. Unfortunately, I only found one from my last visit. As someone who calls herself a photographer, I feel ashamed that I used to take pictures of things more than people 3 years ago (the last time I saw him). I hide behind the lens instead of putting myself next to loved ones because of juvenile notions. 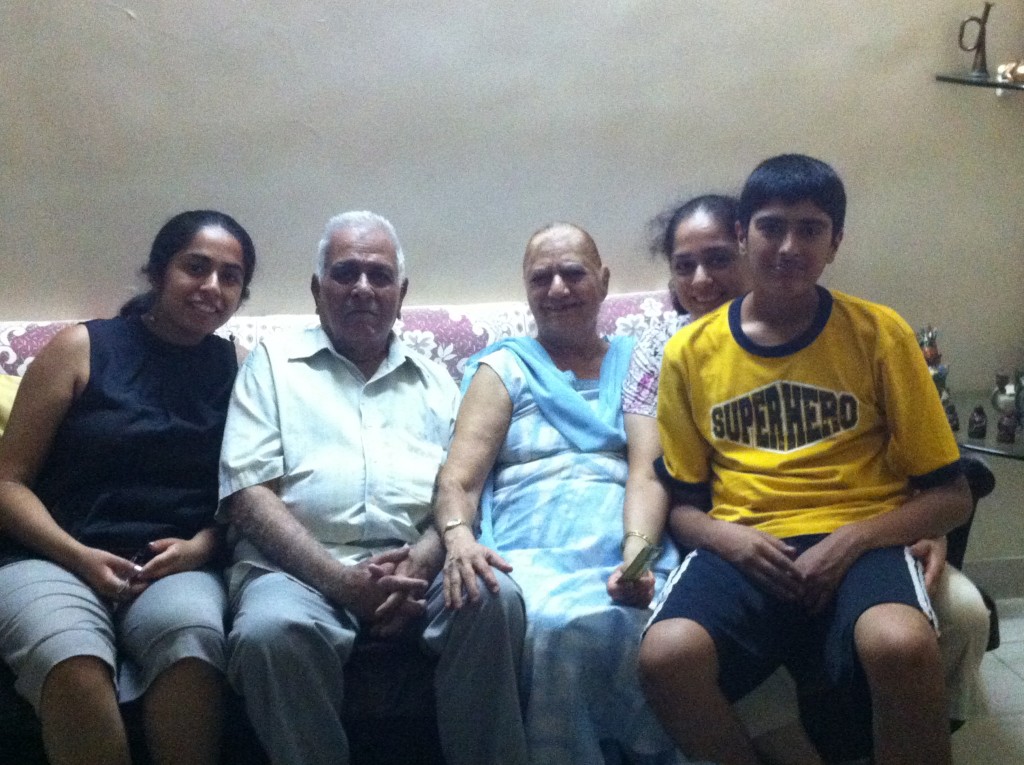 It also makes me very self-aware of what parents mean to us as they get older. As my mom and uncle struggled to make the 22 hour journey to India to be there, I have started thinking about what it means to live so far away from our aging parents. Maybe it’s just Indian culture, but the balance between the family that raised you and the family that you’re raising in America is rarely struck. I still consider myself lucky that I’m not a continent away from my mom, but life has a way of taking us in different directions as well.

Below is a college admissions essay that I had written about 6 years ago. It’s incomplete and slightly over-exaggerated but captures my memory of him.